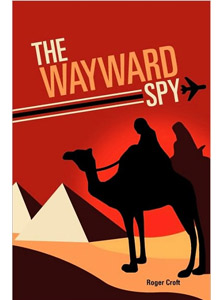 Early reviews of ‘The Wayward Spy’ are unequivocally enthusiastic. A rave review comes from the publishing industry’s specialty magazine Clarion in which staff reviewer Lisa Bower awards the novel five stars ***** out of five*****.
‘The descriptions and details in the novel are sharp as daggers. The short, yet fully realized scenes create a brisk pace, no character quite acts the way the reader might think and the plot is full of winding curves.’
‘Croft masterfully includes contemporary geo-political intrigue into his fiction. Readers would be hard-pressed to find another novelist who can so ably describe the political relationships between Syria, Russia, England and the U.S….’
-Lisa Bower
‘The plot’s as byzantine as some of Le Carre’s best spy novels…and at times the reader thinks he’s back in the quirky landscape of Javier Marias’ MI6 trilogy…….. A must read for any spy novel buffs, particularly Len Deighton fans.’
-JF Jay from Canada (on Amazon)
‘A masterwork of its genre… The story zigzags from country to country and from personal conviction—and Vaux’s allegiance is tested to the limits of his endurance. There is also a comic turn by an aging female hack that is pure genius! And of course a love interest with a twist that will astound.’
-McCrum (on Amazon.co.uk)
This is an espionage thriller that successfully conflates the serpentine plots of a John Le Carre spy novel with Len Deighton’s dollops of suspense and irreverence—skillfully tempered by Graham Greene’s ever- present ‘human factor.’
Available at: