Welcome to the official homepage of Roger Croft 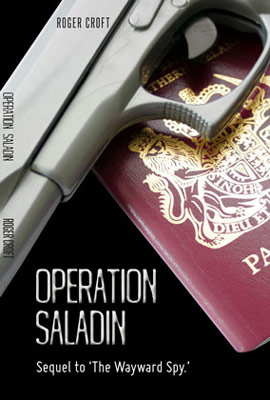 ‘ was nominated by Shareranks.com as one of the top ten spy novels ever written. ‘Operation Saladin,’ its sequel, sees former MI6 agent Michael Vaux in Cairo working as bureau chief of a Damascus-based newspaper. But following the sudden death of Syria’s strongman, Hafez Assad, Vaux’s close friend, Ahmed Kadri, Syria’s chief armaments buyer, falls out of favor. He’s arrested by Syria’s intelligence agency [the GSD] who then demand that Vaux return to Damascus to face questions about his relationship with Kadri and his earlier suspected links to Britain’s Secret Intelligence Service.Warned by Elena Hussein, GSD’s chief of station in Cairo and Vaux’s lover, that he could face the same dubious fate as Kadri, Vaux fears for his safety and opts to quit Cairo.Enter MI6.

His former employers offer to forgive all past misdeeds in return for his accepting a special assignment: to be the principal player in Operation Saladin, an elaborate plot to help a dissident Syrian nuclear scientist to defect to the U.K. along with his top-secret dossier on Syria’s nuclear program and its stockpiles of nerve gas and other chemical weapons.But events don’t go according to plan: Dr. Nessim Said, the Syrian scientist, is shot dead in the quiet English village where he had been sent with Vaux for a few days of relaxation and surreptitious debriefings.Hope of locating the nuclear dossier evaporates with Said’s assassination. Who killed Said? Prime suspects include the Mossad, whose ‘targeted killings’ of nuclear scientists working for Arab regimes, has become a familiar pattern. But the Syrians, unaware of Said’s plan to defect, blame MI6 and in particular Vaux. An Al-saiqa [Syrian Special Forces] hit team is sent to hunt Vaux down…

Roger Croft’s ‘The Wayward Spy‘ was nominated by Shareranks.com* as one of the top ten spy novels ever written. This is a resounding debut for the author’s first espionage novel, a cerebral yet action-packed story of a spy who really did come in from the cold. Discovered by a prowling ‘talent spotter’ and recruited by MI6, Britain’s intelligence agency, Michael Vaux, a former journalist, is the ideal candidate to be the key secret agent in a clandestine operation to discover the details of a multi-billion dollar arms deal between Syria and its old ally, Russia. MI6’s bulky files on prominent journalists reveal that Vaux is an old college friend of Syria’s chief armaments negotiator. Throw the two together ‘by a fortuitous accident’ and Vaux’s job should be easy. But the wayward spy proves less predictable than Sir Walter Mason, his boss at MI6, could have thought possible. This is the backdrop of an espionage tale that takes the reader from the heady international confabs in Geneva to a manacled Vaux imprisoned in a Russian-owned lakeside villa and eventually to Vaux’s regained liberty —at a price.

‘Operation Saladin‘, the sequel to ‘ The Wayward Spy’, sees Vaux again on the run—this time from the GSD, Syria’s spy agency, who after several years as a reporter in Damascus, want to question him about his relationship with his old friend, Ahmed Kadri, now behind bars on suspicion of being a double agent working for Britain. Vaux, then based in Cairo, is persuaded by his lover Alena Hussein, the GSD’S chief of station in Cairo, not to return to Syria. Meanwhile, ever vigilant MI6, pounce at the opportunity of bringing back a recalcitrant Vaux into the fold. His mission, which he accepts because he is now jobless, is to help suborn a dissident nuclear scientist out of Syria and into the clutches of MI6 on the promise of political asylum in the U.K. in return for a top-secret dossier on Syria’s nuclear program and its arsenal of WMDs including nerve gas and chemical weapons. Now GSD’s suspicions about Vaux’s loyalties appear to be justified. An Al Saiqa hit team is dispatched to Britain to hunt Vaux down. In the meantime, the nuclear scientist, in London at an international conference, is shot by unknown assailants. Vaux is sent under cover back to Syria to talk with his widow who apparently has access to a duplicate dossier, now MI6’s holy grail. When he returns with the location of the dossier, this tense thriller is far from over. The hit team surround the small farm cottage where Vaux is holed up with his bodyguards. The outcome is violent and unpredictable.