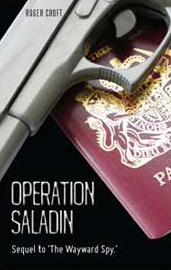 Michael Vaux escapes the clutches of MI6, Britain’s foreign intelligence agency, to join his close friend in Syria—Ahmed Kadri whom he met in their college days, and Alena Hussein, a Palestinian and former colleague at MI6 who later defected to Syria after being exposed as a ‘mole’ operating within Department B3, a small sub-group of  the Middle East desk at the Century House headquarters of the Secret Intelligence Service [SIS].
Vaux and Hussein became lovers when they worked together in Geneva, Hussein fulfilling her duel role as a ‘honey trap’ to make sure Vaux kept to the script as principal player in  Operation Helvetia,  and as a vital informant to the General Security Directorate [GSD], Syria’s spy agency.
Alena Hussein, beautiful and bright, succeeded in sabotaging Operation Helvetia whose main aim was to seize and photocopy the major details of the secret Russian-Syrian arms deal that was being hatched under the nose of the United Nations Middle East peace conference then being held in Geneva. A shrewd retired MI6 staffer and  talent spotter had selected former newsman Vaux as a possible candidate for one-off  projects  and when the diligent spooks at B3 discovered Vaux’s  former friendship with the man who now held the position of chief arms buyer for Syria’s depleted military  and weapons assets, his recruitment to the cause became imperitive.
Operation Helvetia, thanks to Alena Hussein’s diligent work as a double agent, was effectively sabotaged and would be filed as one of Department B3’s more spectacular fiascos.  But MI6 didn’t blame Vaux. They subsequently sent him to Tangier where Ahmed Kadri  had fled after a sudden purge of Sunnis by President Hafez Assad’s close Alawite allies.
But Kadri was soon forgiven for his alleged disloyalties and Vaux, having finished his assignment in Tangier, decided to follow his close friend to Damascus where he hoped to work for an English-language newspaper and eventually hook up with Alena who now worked in Damascus as a Captain in the GSD.
The reunion of all three friends didn’t last.  Kadri was suddenly arrested while Vaux was in Cairo working as a columnist for the Syrian Times.  Hussein had meanwhile been promoted to GSD’s chief of station in Cairo.  Demascus demanded Vaux return for questioning on his relationship with now jailed Kadri and on his former links to Britain’s MI6. On Alena’s advice Vaux decides to quit Cairo and return to the UK to face possible charges. But MI6 forgives him for past sins of omission and hires him to be the principal player in Operation Saladin.
Operation Saladin’s plan is to help a dissident Syrian nuclear scientist defect to Britain along with his fat top-secret dossier on Syria’s nuclear weapons program plus details of its stockpiles of nerve gas and other chemical weapons. Vaux joins Dr. Nessim Said, the Syrian scientist, in the depths of the English countryside. His aim is to work on the nervous and somewhat ambivalent defector and surreptitiously debrief him. But Said is murdered in front of the manor house where they are both staying. Was his assassination a simple robbery or a more sinister plan by England’s enemies to sabotage what could have been a major intelligence coup?
The answers to that question lie buried in the final chapters of Operation Saladin.
Available at: