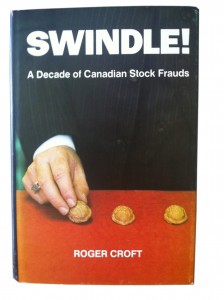 This was a best-seller in its day (1975-76) but brilliant scams always fascinate—the South Sea Bubble and the Tulips swindle are ancient, classic frauds whose ignominy lingers on into the 21st. century. ‘Swindle!’ highlights the collapse of once towering Atlantic Acceptance Corp., a major Ontario-based finance and insurance group. The early chapters relate a step-by-step progression from the inception of the fraud to the final bounced check for a paltry $5 million made out to Toronto-based white-shoe brokers Royal Securities Corp.
The fraud engulfed—and in some ways was triggered by—Commodore Business Machines, an early Canadian developer of the desktop computer whose main North American competitors were the likes of Apple Computer, IBM and Hewlett Packard. Commodore’s business model was faulty (its founders were former typewriter repair men) and an early surge of successful marketing led to ultimate disaster. Atlantic Acceptance promoted Commodore, held a substantial share stake (to bail out the founders) and was basically over its corporate head.
The Atlantic Acceptance fraud and the subsequent unsuccessful cover-up constitute a classic study in any law school course on stock frauds. A paperback edition of ‘Swindle’ was aborted thanks to a lawsuit from a Mafia-connected ‘entrepreneur’ whose photo-copying outfit featured in a subsequent chapter of the book. Canadian publishers, constrained by Canadian libel laws modeled on U.K. statutes, panic at the mention of a libel suit and withdraw the offending book or its paperback successor from circulation until the suit is settled—usually too late for any resumption of a successful marketing plan. The ‘Swindle!’ libel suit was eventually settled for a paltry sum but the paperback edition never materialized. This could change if Canadian law schools feel the definitive work on Atlantic is worth resurrecting.
The book also highlights a classic Canadian penny stock swindle orchestrated by Viola MacMillan, then known as the ‘Queen bee of Canadian mining’ as well as Bernie Cornfeld’s IOS mutual fund disaster which had numerous Canadian connections and ramifications. Other scandals covered in the book include the Vancouver Hockey Club (later to boast a team called ‘the Canucks’); and the mob-financed Pan American Mines caper.
‘Swindle’ is available (used copies) at Amazon

and at many independent book sellers.